When we bought our first home 4 years ago we knew we were in for a big project. It was built in the 70’s and hadn’t been touched since. There were many projects to tackle but we made the kitchen a priority. The existing kitchen was awkwardly positioned in one tiny corner of the 18×9″ space and there was no question we were gutting the entire thing! Read along to see the big reveal!

The vibe of the space felt like a very old kitchen that you would find in a cabin deep in the woods. The existing “backsplash” was a stenciled pattern featuring grapes and pears, some of the cabinets were barely hanging on the walls and there was zero counterspace. On the opposite side of the kitchen was a wide open space which was likely used as an eat in dining area. We knew we wanted to knock down the wall that separated the kitchen from the dining area so we felt like having another space to eat wasn’t necessary. We decided to continue the kitchen cabinets to wrap the entire space. We knew that this was not our forever home so we always made choices with the eventual sale of our home in mind.

The demolition of the space went as quickly as expected. As I mentioned, some of the cabinets were barely hung on the wall. Just took one big tug and they just they fell right. As for the floorplan there wasn’t much to move, we kept the plumbing in the same general area, it was mostly moving electrical outlets as we rearranged the location of the appliances.

After the walls came down we started on the flooring. We found a very inexpensive 12×24 floor tile from Lowes and laid it in a staggered brick pattern. Because we were updating the entire house we had to stick to a tight budget and these floor tiles cost us about $250 total.

Cabinetry is from IKEA. We went with the Bodbyn cabinet fronts in off white and added soft closing hinges. I wanted brass hardware and had a very hard time sourcing it at a decent price point. It was still too trendy to be available commercially yet. I found ours from Lee Valley. They are only available in two sizes so we used the 96mm for the upper cabinets and then the 128mm for the larger lower cabinets.

One of my top tips when planning an IKEA kitchen is to source hardware from alternative sources, for more on that read this post.

I chose a Brushed Nickel faucet to match our stainless steel appliances. I didn’t want all the hardware to match and I really liked the contrast. We chose a large undermount single sink. I wanted something special for the backsplash to really make all the white cabinetry pop. We found a decently priced option from Lowes, a marble chevron mosaic. I think it’s been discontinued but I found a similar one.

This kitchen was very functional for us. There was a ton of storage and we loved utilizing the drawers for all our dishes, bakeware, entertaining dishes etc.

This post took me way too long to write but I’m glad I can finally share the before and after details with you!

What do you think of the after? 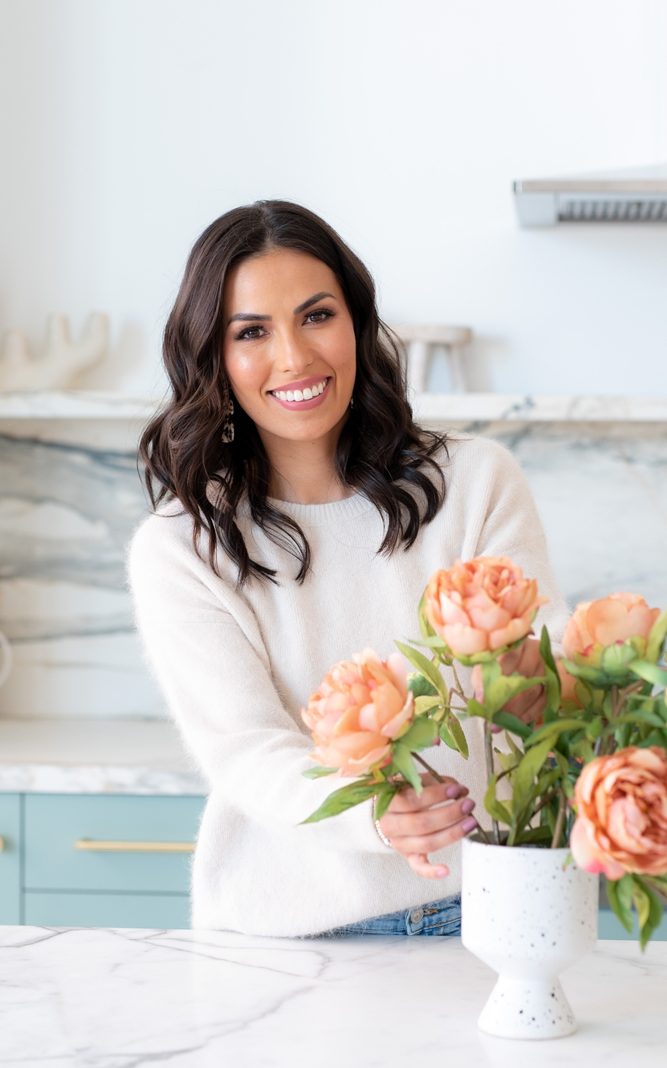 Chloë K Design Studio creates beautiful and functional spaces for busy professionals who don't have the time to deal with planning and implementing a design project. I specialize in designing Semi Custom Ikea Kitchens for a designer look without the price tag. Based in Burlington Ontario, servicing Oakville, Hamilton and Niagara region.